The month is almost ending. I have not had the time to sit down and actually write out this month’s blog. It’s been a rough couple of months. And this is an understatement. I think the reason why it’s been hard for me to write this entry is because of what I knew I wanted to talk about. I’ve been prolonging it for as long as possible, but because I’m trying hard to keep up with this New Year’s resolution, I’m going to have to push through.

2018 was off to a great start. As you know, I was not dwelling on the whole “New Year, New Me” crap that I feel most of us tell ourselves every year. I was hopeful for what 2018 was going to bring because I knew my end game. But life can throw you some curve balls and you somehow have to figure out how you’re going to keep yourself from falling apart.

For the last 20 some years, our next door neighbors have been like family to us. We celebrate pretty much all holidays and milestones together, with their youngest being my goddaughter. Over the last three years, I had been helping my goddaughter’s grandmother with her at-home dialysis. Through this, we became incredibly close and she became like my “grandma” – having already lost all my grandmas. At the end of February, she passed away. One.

I have not mentioned it here yet, but a couple of years ago I made the decision to go back to school. I entered an accelerated nursing program and am graduating in less than a month. It’s been a constant test of mental and physical endurance. During this time, I was taking my final graded term and I was working hard at securing a goal I had made for myself when I first started the program. A fear I carried was losing my first patient. And about a week after I lost my “grandma”, I lost my first patient. Two.

After that 12-hour clinical rotation, I felt defeated, upset, and absolutely helpless. There was a lot of questioning of my knowledge, skills, what I could have done differently, and whether nursing is really for me. Having mourned that loss for a couple of hours, I found out my grandfather died. Fuck. My grandfather had been in my life since the day I was born. He knew me when I was still in utero. He was around for every milestone. And he’s the main reason I decided to go back to school for nursing. Three.

Because of other private issues that have happened in the last year or so, I haven’t gotten to visit him. I did not get to go to his funeral and it saddens me every day. It’s not until I’ve started writing this blog that I’ve actually been able to mourn his death and cry it out. Because of the first two deaths, school, and the anxiety of not being able to go to his funeral, it made it so incredibly hard to properly mourn.

It had to be business as usual and I had to try desperately to not have a mental breakdown. Somehow I was motivated even more to finish strong with what I started to ensure that he would be incredibly proud of me. It breaks my heart to pieces because he promised me he’d be there at my graduation cheering me on with bells and whistles.

Suffice it to say, it really has been a rough few weeks. But every day I’ve slapped on a smile, worked hard to ensure that I make him and my family proud, and mastered the art of avoidance and not think of all that was lost.

Three. Definitely not my favorite number. 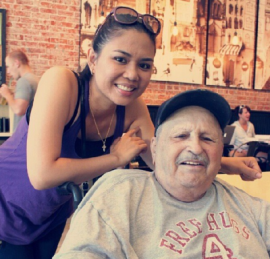