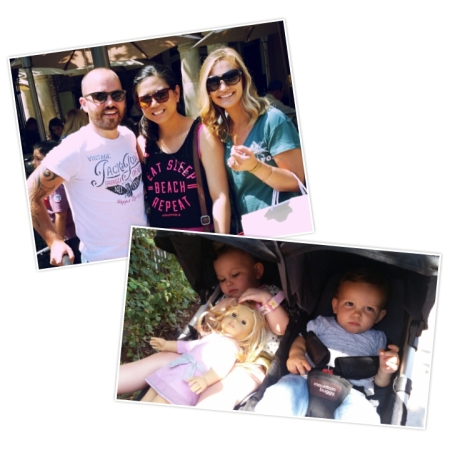 Earlier this week I had the extreme pleasure of meeting this beautiful family. The Saccone-Jolys are an Irish vlogging family currently living in England. They post daily vlogs on YouTube, and I haven’t missed a single vlog since I started watching. I’ve been watching for about 3 years, back when Anna was still pregnant with Emilia, their channel was still called LeFloofTV, the puppies were still puppies, and vlogs ended with Jonathan’s “…’cause that would be awesome” as the end slate. I’d have to say they’re definitely a great example of what my ideal family would be like – happy, put-together, positive, loving, and filled with six Maltese dogs (#nojoke #goals). They’re every bit as normal and down to Earth as you’d imagine, Anna a tad bit shyer in person. I had met them at the Grove in Los Angeles after they had “The Cheesecake Factory” experience, leaving Emilia and Eduardo in a bit of a cheesecake coma. Emilia was playing with her new American Girl doll whom she called “Aurora”. Such an adorable family and so glad I was able to meet them when they finally made it to my side of the world.