I can’t believe we’re already in the third week of 2016. 2015 is starting to feel so far away…not much really.

When we got from Vegas after New Year’s Day, we headed over to Pasadena to view the floats from the Rose Parade. I haven’t done that since I was in grade school, so it was kind of exciting. Parking wasn’t friendly, but we were able to find spot about half a mile from the entrance. I was most excited to see the Los Angeles Lakers’ float and although it was by the entrance we decided to save it for last. It’s amazing how much work goes into putting each of the floats. Every inch, every detail blew my mind.

My two favorites are obviously from the City of Los Angeles and the Lakers’ ones. I wish we had gone to the Lakers’ float first because by the time we got back to it, the sun was directly behind causing my photos to be quite rubbish. Every part of the Lakers’ float screamed purple and gold, it’s no wonder they won “Judge’s Special Trophy” award for Most Spectacular in Showmanship and Dramatic Impact. I wish I really could have gotten better pictures of it, but it was great seeing them nonetheless. 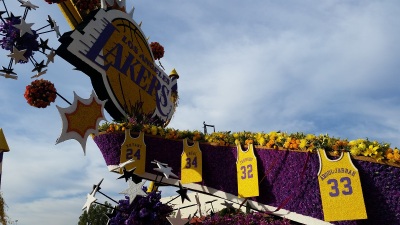 My Mom and I