I’ve been wanting to visit the Arboretum in Arcadia for months now and recently was able to make the trek there. I started my day fairly early and totally forgot to have breakfast beforehand. I figured I would need food for energy because of all the darn walking. So I order the breakfast sandwich from their Peacock Cafe and about two bites into my sandwich I figured out why it was aptly named that when three female peacocks came strutting over with something naughty in mind. Cue me walking ever so quickly back into the cafe to finish my breakfast. 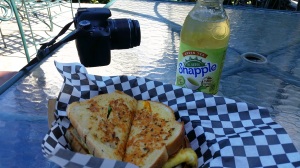 I chose to go to the Arboretum on their free day (3rd Tuesday of every month) and boy was it swamped. I got there about an hour after it opened and the parking lot was already pretty packed. There were a lot of people already – kids, walkers, and tourists. The weather was nice, but not quite a clear day – what’s new in LA? The Arboretum was certainly pretty, but not as green as it probably would be if California wasn’t experiencing a drought.

I spent the better part of my time there just trying to find this waterfall I heard other visitors talking about. I ended up taking the longest way there, walking through an area where only me and two other people were walking for about 15 minutes. Eventually I heard the sound of running water and I knew I was getting close. It was really nice to see a waterfall in bone dry California. 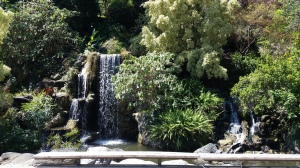 Overall, it was a nice way to spend my morning. I’d imagine it be much quieter on non-free days, but sometimes a crowd can be nice.

I used a combination of my Canon Rebel T3i, GoPro Hero 3, and my Samsung Galaxy S5 to take pictures. They didn’t come out as vivid or clear as I’d hoped. There certainly wasn’t enough green or enough blue in our gray skies. Los Angeles County Arboretum and Botanic Garden